An opera about Morris Graves

In 2013, Morris Graves: Selected Letters (ed. Vicki Halper & Lawrence Fong) was published by University of Washington Press. Playwright/actor Joan Schirle read the letters and was struck by their passionate intensity, the beauty of Graves’ writing and the circle of women who supported his work and vision. She was especially interested in Graves’ response to war, in 1941 he was drafted, and though registered as a conscientious objector he spent 11 months in an army prison at Camp Roberts, California. Upon his release, he wondered if he could ever paint again.

Joan first thought of creating a piece of theatre, and staged three public readings of the letters with a group of actors in Humboldt County in 2018. It was during a residency at The Lake that she realized Graves’ words should be set to music, and invited composer Gina Leishman to write the music for a chamber opera. Following Graves’ lead, Joan’s libretto is sung by a cast of birds, and begins: “This is the story of the human predicament, as told by birds…” inspired by one of Graves’ most powerful paintings, “Wounded Gull,” Leishman composed an instrumental dance to be performed by a bird puppet.

A chamber opera is more intimate than grand opera, with a smaller cast and fewer instruments. “Bird” is scored for 5 singers, and 3 musicians playing piano, cello/bass, accordion, glass armorica and piano harp. Characters include Graves, and a bird chorus playing Graves’ mother, his friend Jan Thompson, his dealer Marian Willard, as well as army personnel, and a single bird puppet.

The August performances are a workshop version, performed concert style with projections of Graves’ paintings. Originally scheduled for June 2020 but postponed due to the corona virus, we are now happy to present a first version of Bird of the Inner Eye. Our hope is to interest an opera company in producing a fully staged production of this original work.

The development of Bird of the Inner Eye received funding support from OPERA America’s Opera Grants for Female Composers program, supported by the Virginia B. Toulmin Foundation, as well as many generous donors. 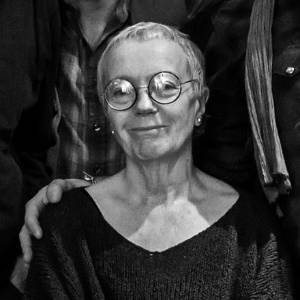 Gina Leishman (composer) is not only a composer, but arranger, multi-instrumentalist and performer as well. She was British born but has resided in the US since seemingly forever, having fled the goldfish bowl of Old Europe. She composes for theatre, opera, dance, film, television, and concert stage, and has garnered numerous awards. Collaborations with other artists include directors Karin Coonrod, Robert Woodruff, Lisa Peterson, and Joseph Chaikin, writers Ellen McLaughlin, Tony Kushner, and Naomi Wallace, choreographers David Gordon, Bebe Miller, and Deborah Slater, composer Doug Wieselman, and performance artists Rinde Eckert and John Kelly. Her ensembles include the long-standing septet Kamikaze Ground Crew, a vehicle for original composition, the Mr. Wau-Wa band, a quintet dedicated to the songs of Bertolt Brecht, and various quartets in support of her solo work. Recordings are available on Koch Jazz, New World Records, Bus neat and GCQ Records. She is also an award-winning narrator of audio-books. She lives in New York City.

Joan Schirle (librettist) is an actor, playwright, director, and deviser of original work, including over 30 plays and collaborations. She is a pioneer in the US development of physical theatre, ensemble theatre, and theatre of place, and is a co-founder of the Network of Ensemble Theatres. Awards include a Fox Foundation/TCG $25,000 Resident Actor Fellowship and a 2018 Lifetime Achievement award from the Association of Movement Theatre Educators. In 2004 she was honored at the 16th Cairo International Experimental Theatre Festival as a leader in the field of experimental theatre. She is the founding artistic director of Dell’Arte international, a theatre production and training center. In 2018 she was awarded a three-week residency by the Morris Graves Foundation at his last home “The Lake,” in Loleta, CA. in November 2018 she presented readings from Graves letters and archives and in 2019 readings from the women in his life. Previous collaborations with Gina Leishman include The Weave (dir. J. Schirle), Flock (dir. G.W. Mercier), and Dell’Arte Company’s Slapstick, The Redwood Curtain Trilogy; Red Noses, and Animal Farm.

Due to the current COVID restrictions in Humboldt County, we have regrettably had to make live performances of Bird of the Inner Eye unavailable to the public.

However, we will be streaming the opera!

If you bought a ticket already, you will be sent a free link to:

We will continue to sell tickets to the stream recording until September 3rd. If you know others who would like to see the opera, tickets to the live-stream and recording are $20, available on the Dell’Arte website.

We are still in need of donations!

“My first interest is in being;
Along the way, I am a painter.”
—Morris Graves

On behalf of the Morris Graves Foundation, Robert and Desiree Yarber extend their heart-felt gratitude to the many friends, guest artists, neighbors, and colleagues who have been so supportive of the foundation's work over the past 15 years. Each of you has truly shared a unique and deeply caring part of yourself at the Lake, and thus, has made a lasting impression on the "Legacy of the Lake."